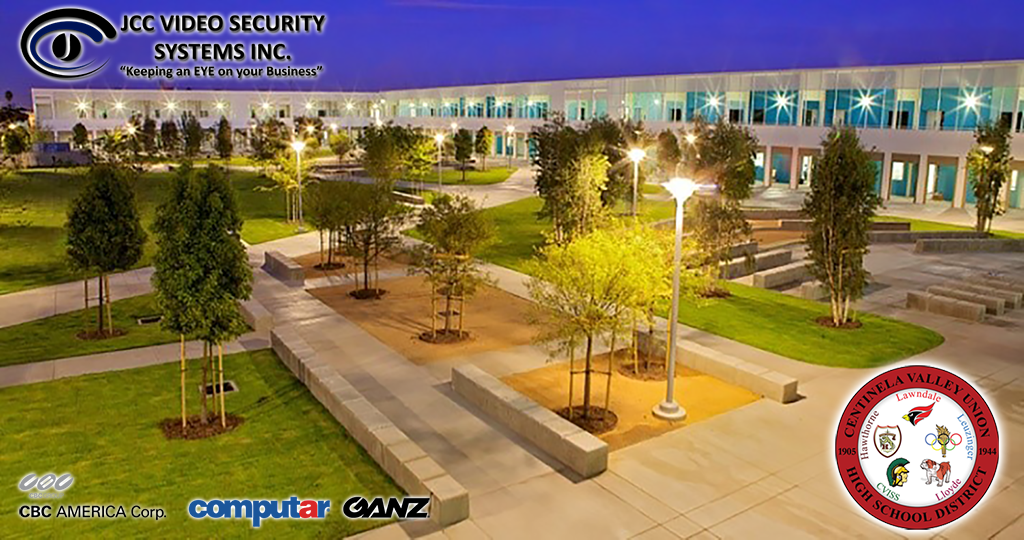 Savvy school districts and security directors across the country are learning a whole new curriculum –  how to successfully heighten security in their schools. So many incidents of sad and senseless violence in our nation’s schools have hit the headlines over recent years, causing many districts nationwide to put increasing security for students and staffs at the top of their priority lists.

The Centinela Valley Union High School District (CVUHSD) based in Lawndale, CA had already proactively installed some analog cameras in its four High Schools back in 2009. So when it came time to prepare budgets for a major expansion and some reconstruction work at its campuses recently, funds were wisely allocated to expand and upgrade its existing video surveillance system. The District looked to Jose Covarrubias of JCC Video Security Systems, who served as the integrator on the initial project in 2009, to lead the effort. Security would be upgraded at each of its four High Schools: Hawthorne, Lawndale, Leuzinger (pictured below), and Lloyde. The expansion project got underway in the summer of 2013. Covarrubias turned once again to CBC America as his technology provider. CBC had bid on the project and provided the District’s Head of Security with an IP Video presentation. They were impressed with the technology CBC could bring to the installation and, because Covarrubias had already deployed CBC’s analog cameras in the initial 2009 install, upgrading with their high-definition IP cameras was a natural progression.”I’ve been working with CBC for about fifteen years now,” he says. “I’m really happy with the quality of their equipment, and their level of service.”

The high schools are large and with the remodeling, required a lot more cameras. Covarrubias explains that many are being used to monitor hallways on the various floors, cafeterias, and other key areas throughout the school, as well as in the parking lots and entranceways. Approximately 400 new IP cameras have been installed over the two phases of the project, which was completed during the Fall 2014 school year, across the District’s four schools, warehouse, and central office building. In addition to the schools, the District Warehouse is also being secured with 19 ZN-DT2MTP-IR cameras. The District office also has been equipped with seven ZN-DT8312NBA-IR analog cameras, bringing the total number of CBC cameras installed across the District to 416. These CBC cameras are equipped with GXi Technology which adds a suite of Imbedded Intelligence options to the already feature-rich PixelPro IP camera series. This Imbedded Intelligence Technology maximizes surveillance capability with a powerful set of built-in real-time video analysis tools. And the cameras, Covarrubias adds, because of the built-in analytics, can change position and follow intruders or and suspicious people when detection zones are breached and capture detailed information on the video stream. This is a huge benefit for the School District, offering added security and peace of mind.

Each school features its own mini-monitoring station where security guards and other security personnel, roughly six per school, can view the video streams. In addition to sending alerts to school security personnel (all of which have an app on their mobile devices to notify them when an alert occurs), the system is also tied into the local Hawthorne Police Department, allowing officers to log into their remote PCs to view what is happening.

Getting It Up and Running

William Godoy, IP Product Specialist for CBC America’s Imaging Technology Division, worked closely with the School District’s IT Director, Gilbert Gutierrez, and security staff to train them on and acclimate them to the new IP system. “The training process was been pretty straightforward for Gil and his team,” Godoy states. “They are learning quite a bit about our new analytic cameras they have installed and what these cameras can do for them. For instance, the cameras are set to record on motion for the smallest change in the scene at very high sensitivity. However, since we do not want to record 24/7, we enabled the analytics portion for Scene Change detection. This enables the camera to learn what it sees and only records when abnormal motion occurs.”

Godoy adds that CBC programmed the cameras to its ZNS Software to adjust resolution, recording frame rate, and analytics parameters. The District’s IT department has also been instrumental in configuring IP addresses and helping to fine tune their system to their specific preferences.

The Centinela Valley Union High School District is now benefitting from a smarter, more secure surveillance system. Covarrubias notes that there had been some previous incidents of a few students vandalizing school property a bit, and now the cameras are curtailing that and also helping to provide evidence if disciplinary action is warranted. The interior and exterior of the school are now being better protected and, as Covarrubias adds, “It doesn’t matter where a school is located, there is a need now in our society for cameras to be there, to safeguard them. It ‘s so much better to be safe than sorry.” The Hawthorne P.D. now also has the added ability to view activity in real-time and provide a quick and thorough response.

CBC AMERICA Corp. is a wholly owned subsidiary of the CBC Group and part of a global network of Import, Export, Trading, and Distribution companies, strategically located throughout the world. CBC AMERICA Corp. is the largest organization of CBC’s companies, with divisions in imaging technology, optics, chemicals & pharmaceuticals, flooring, plastics & resins and Eco Energy. The Imaging Technology Division specializes in the design, manufacturing and distribution of lenses and video surveillance products. CBC AMERICA Corp. continues to expand and unify its position in the global security market by offering a comprehensive line of products under CBC’s own brand names, Computar and GANZ.